North American CEOs among the most optimistic: report 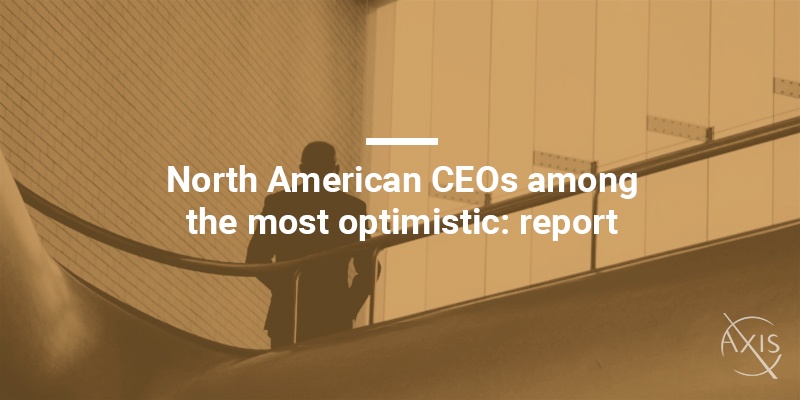 Cyber threats top the list of worries from corporate leaders

The report, aptly titled “The anxious optimist in the corner office” was released in early 2018, and indicates that in spite of geopolitical uncertainty, the possibility of artificial intelligence stealing jobs, and corporate ethics scandals, corporate leaders have a generally rosy outlook.

Of the 13,000 business leaders surveyed, 57 per cent say they believe global economic growth will improve in the next 12 months. That is nearly double the level of optimism expressed last year (29 per cent). It’s also the largest ever increase since PwC began this survey in 2012.

It’s also the first time the share of optimists has passed the 50 per cent mark.

Forty two per cent of those surveyed said they’re “very confident” in their own organizations’ growth prospects in the next 12 months. That’s up from 38 per cent last year.

What’s driving this upbeat view? PwC points to last year’s economic record: “When all the data is in, 2017 will almost certainly turn out to be the best year the global economy has seen since 2010. Most of the world’s major economies are experiencing positive growth in contrast to the situation just a few years ago.”

This attitude is especially strong in North America, where positive near-term outlook among CEOs overall is at historic levels. “The last time North American CEOs were this exuberant was in 2007, the year before the global financial crisis,” reads the report. Confidence in their own business growth prospects for 2018 rocketed to 52 per cent, up from 39 per cent in 2017.

When it comes to long term growth, however, positivity wanes. More CEOs said they were “somewhat confident” rather than “very confident” three years into the future.

This is at odds with the typical outlook; generally CEOs are more confident long term than short term. The report points to the two years preceding the 2008 financial downturn, when “very confident” levels began to decrease. But it also warns not to read too far into those numbers. “It may simply be harder for CEOs to see beyond the near term,” says the report. “So much has happened in political arenas around the world that expert observers could not have predicted.”

So what are CEOs concerned about? Along with the usual over-regulation, terrorism and cyber threats jumped to the top of the list of worries from the corner office.